It was in April 2013 when I finally had a chance to visit Venice again. My beloved wife and I strolled along the narrow streets, and of course we had a look at the display windows of the mask makers. And there we found: Guy Fawkes!

The Venetians produce the mask in their traditional way, and somehow their version looks friendlier than the well-know plastic masks which are based on the comic “V for Vendetta” and the film version. 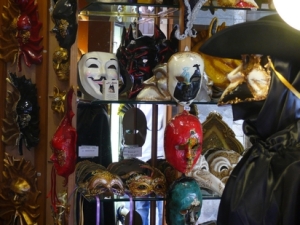 Just a joke for the tourists? Maybe.

But it is an intriguing phenomenon: In modern Western civilizations, the Guy Fawkes mask is perhaps the one with the highest impact on culture and political life, and it stands for privacy and the right to act anonymously. And now it has found its way back into a a cultural environment which in the past used probably the most elaborated anonymity concept in daily life and for political purposes.

This is the second approach to launch Licence to Mask, as the first site was hacked in July 2011. From August 2011, step by step the existing content was filled in again. Additionaly, Licence to Mask this time has a German version, too. Rebuilding the website started August 12th 2011. Since January 6th 2012 it's up and running again. Time for new Posts!